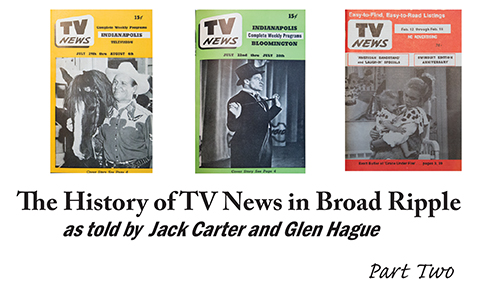 In the last issue: Don Satterfield starts TV News in 1950, publishing from his home on Riverview Drive. He moves it to 915 Broad Ripple Avenue (where Triton tap is today). He hires Glen Hague. Glen quits and suggests his friend Jack Carter to take his job.
"Don told about the fact that he was building this nice office building over [on Ferguson Street]." Jack hadn't been over to look at the construction. "And then when I went over there and saw that dinky little brick building I just couldn't believe it. I had a grandiose office building in mind and there that dinky little place - no insulation in it, with brick walls and a steel-reinforced concrete ceiling - it was a horrible environment inside. Nevertheless, we were there for several years."
Don built a new building for TV News at 6331 Ferguson Street (Today this building is Ripple FX. They improved it and added a second floor.). TV News moved from Broad Ripple Avenue probably in the late Spring of 1956.
TV News building for many years at 6330 Ferguson Street