Column
The History of TV News in Broad Ripple as told by Jack Carter and Glen Hague - part one
by Alan Hague
posted: Nov. 15, 2019 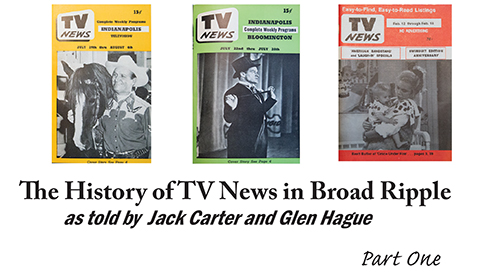 I first heard of TV News while interviewing my uncle, Glen Hague, about his days at Hoster-Roberts Ford in Broad Ripple (see Vol. 16 #21 & #22). Glen is friends with Jack Carter, both are Broad Ripple High School graduates (Glen 1951, Jack 1946). Jack ended up buying and running TV News for years. This is the story of that magazine.
Years ago, before TV Guide, there was a weekly local magazine that listed all of the programs available on TV. It was back in 1950 when Don Satterfield started TV News, just a year after Indianapolis' first TV station, WFBM TV Channel 6, went on the air. Sarkes Tarzian started WTTV Channel 10 (later to become Channel 4, home to your editor's favorites such as Popeye and Janie, Cowboy Bob, and Sammy Terry) in Bloomington at about this same time. It required a large antenna to pick up that signal in Indianapolis. Surprisingly, Satterfield decided that Indianapolis needed a TV listings magazine when there was only one channel in Indianapolis and a weak one from Bloomington. He started publishing in the garage of his house at 6411 Riverview Drive in July of 1950.
1950 TV News cover

The magazine started out at about 16 pages and was small, like TV Guide would also be in a few years. In addition to the TV listings for Channel 6 and Channel 10 there was a list of TV repair shops that included A-C Radio and Raub Radio and Appliances on College, The White House on Broad Ripple Avenue, and TV Specialists on Fairfield. There were letters to the editor in every issue. Glen said that they usually wrote those letters themselves to have something interesting for the column. There were two gossip/news bits sections called "Video-Briefs" and "TeeVee Tattler" and a profile of a TV personality. When the magazine started, there were only 3 pages of TV listings, since there were only two channels. It even had a listing for the test pattern, which was broadcast daily from 2pm to 6pm! Subscriptions were $5 for 52 issues.
TV listings from 1950

TV News was printed by the Hudler Press, owned by Reid Hudler. [Note: Reid is likely related to Phoebe Hudler who started the North Side Topics, located at 62nd & College Avenue, in Broad Ripple in 1922. That was the year that Broad Ripple was annexed by the City of Indianapolis.] Reid Hudler also published the Noblesville Times and the press was in Noblesville.
In 1953 the national version of TV Guide is published for the first time.
Starting in about that same time, TV News moves into 915 Broad Ripple Avenue. This is Triton Tap today [H5 on map]. The city directories show that this location was also Broad Ripple Pizza Hut in 1958, your editor played pinball there in 1974 when it was Zap's Joint, it was Michael's Jewelry for about 30 years starting in the late 1970s.
915 Broad Ripple Avenue - 2nd home for TV News

Next to this new home for TV News was Wally's Grill at 921 Broad Ripple Avenue. That location has a long history of restaurants. Today it is Crab General. Over the years it has been El Matador, La Jolla, and Sabbatical.
It was while TV News was in the small house on Broad Ripple Avenue that, as described in Volume 16 #22 of the Broad Ripple Gazette's The History of Car Dealers in Broad Ripple part two, in 1954 Don Satterfield buys a car from Glen Hague. Glen is working at North Side Chevrolet at the time. Don offers Glen a job at TV News and Glen accepts.
Glen recalled, "There were only four of us in the whole thing and we did the whole thing. We [printed] at Hudler Press, we did all of the other stuff here, locally, take them to the post office, bag them and all that."
Glen described the rotary, hand-cranked machine that printed out the addresses on the magazines for the subscriptions. He then put the thousands of magazines into bags and drove them to the post office.
"Satterfield would not let us even go to lunch together," recalls Glen. "Because if anything happened to us it would put the magazine out of business. We couldn't ride together, anyplace. Always had to be separate."
"I learned I lot at the job," said Glen. "We went to [Hudler Press] every week and stayed at the press while they were printing off some copies so we could proofread them. To this day, I can still, if I look at anything, even if I don't know how to spell it, I know if it's wrong. And, Satterfield was a nit-picker for that. We had one thing happen, I think it was Falls City Beer ad, full-page, and boy if we didn't get the time wrong on the thing - on this big TV program coming up. We got that cured before he saw it. If we found a mistake on stuff that had already been printed, we would just all get together real quick and make sure that those got shipped to a different area (like Terre Haute that didn't get that channel) so it wouldn't interfere [with readers TV viewing]."
I asked Glen about the stores that sold TV News. He said, "Stores had racks to put TV News in and TV Guide. I would always go in there and make sure that TV News was seen, instead of being behind TV Guide. Because the first thing people would do is grab TV Guide instead of TV News. I'd go back the next day and it'd be switched around again!"
Glen explained that he would sometimes get the program information for the next issue by watching TV at the end of the hour to hear the announcement of who would be on next week. "At night, when you went home, if you had to go to the bathroom, or something, you had to have somebody checking the TV for you at the end of the program to see what they announced, if you weren't available!"
He would also call or visit the stations to get program information. "It was kind of neat calling on the channels. You get down there and knew everybody on the network and they knew you and what you were doing. And they liked seeing you because they knew it gave them publicity that they wouldn't have had if it not been for us."
Glen mentioned that he and the other employees would get notes from Satterfield. "Don had this typewriter that missed about 2-3 spaces each time he hit a key. When he had a problem with someone he would type a letter on yellow paper and seal it in an envelope. He always used yellow paper and all the notes he sent were from that typewriter on that yellow paper. I can still see that yellow paper. He would mail it to you sometimes, instead of bringing it down. Eventually the day came when I got one of those yellow letters in the mail. I looked at that thing and I thought..."
Glen had decided TV News was not for him. He grew weary of the non-stop production cycle and of the frequent yellow letters. He belonged in the car biz. He told Don that day , "You don't need to send me any more of those yellow letters, I'm quitting," said Glen, "But I have a replacement for me that will do a great job."
That replacement was Glen's friend Jack Carter. Jack had been working at the White House. It was an electronics store at 910 Broad Ripple Avenue owned by Jack White. Today this is the eastern-most section of Brothers Bar and Grill [G5 on map]. The store sold appliances, did repairs, and sold records and stereo equipment. There was even a recording booth there where you could make your own 78 RPM records. [Note: your editor's father, John Hague, made records in that booth during his high school years.]
Don hired Jack as the Assistant Program Editor. I asked Jack about his first role there, "To contact all of the television stations and keep information flowing between the television station and TV News to give us all the latest information. When I first started, there were three network stations, and a total of 4 or 5 stations is all there were."
--- end of part one ---