Column
Converted from paper version of the Broad Ripple Gazette (v07n01)
Howling at the Moon by Susan Smith
posted: Jan. 08, 2010 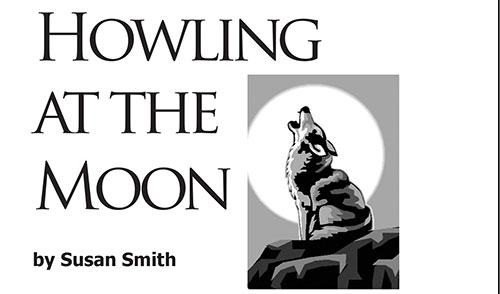 Happy New Year! Another new decade is upon us. I always love the close of the year and reviewing the year left behind. But this was the closing of a decade and it was interesting to go down the road in retrospect. Leonard Pitts, one of my favorite syndicated columnists, wrote in the Indianapolis Star that this decade could be referred to as the "uh-ohs". I thought that was clever since this was the decade of the 2000's (00's - get it?) and certainly there were a lot of uh-ohs, starting with 09/11/2001 and continuing with the recession, war, etc.
Speaking of going down the road, I went down the Yellow Brick Road with my grandson last month at the Indianapolis Civic Theatre to see the Wizard of Oz. What a wonderful show they produced. We especially enjoyed the little dog that played the role of Toto. He was a Yorkshire Terrier. The costumes were wonderful! The Munchkins were delightful, with voices that were a hoot. I am sorry to see the theatre move to Carmel, but they are very excited about having a permanent home with more space.
I started the new year with a party hosted by members of the Indianapolis Obedience Training Club. Starting in 1938, this is the third oldest obedience club in the United States, affiliated with the American Kennel Club (AKC). This is a not for profit organization that is the place to go to learn to train and handle your dog. Other dog obedience schools are businesses which are completely different from this group. These people are true dog people who have turned out many champion show dogs and started the pet therapy concept in Indianapolis, beginning with Community Hospital more than twenty years ago. When we got our dog six years ago we were guided to them for training. She completed her training and then became a pet therapy dog and we became friends and members of the club. And there is the difference - becoming friends and members, not just paying clients. Thus, the holiday dinner party. There were enough people to fill four groups in four rooms of the house. Out of curiosity I went from room to room to see what each group was discussing. You guessed it - dogs. Nothing but dogs. Out of meanness I decided that there was enough dog talk and saw the need to shake some things up in the one group I was with. I brought up the Colts/Jets game. After I successfully started a heated discussion, I stepped into the next room. This room was full of The Wizard of Oz collectables. I struck up a conversation with the hostess. I learned that her Cairn Terrier had been Toto in a St. Louis production of the show. How coincidental, since I had just seen the Civic show. Since it was all fresh in my mind I could really follow her story. She told me that many years ago the theatre in St. Louis was desperate for a Toto. They were in the midst of production with sell-out crowds of 12,000 every night. The star of the show was Phyllis Diller as the Wicked Witch. They had gone through two Totos who weren't working out. They needed an obedient terrier ASAP. Telephone calls were made. They learned of the Indianapolis Obedience Training Club and the next day Cynthia and dog Teddy were "off to see the Wizard" on the plane to St. Louis. He was such a hit that they continued with the touring group who brought the show to Starlight Musicals in their home town. All of the club went to see one of their own on stage. They still talk about the fun and celebrity of it all. Apparently Phyllis Diller wasn't a witch at all and was quite fun to have dinner with. The actor who played the scarecrow commented that he wished he was the dog because he was so well taken care of. Should you wish to start the year off with an obedient dog you can contact the club at 317-359-2030 to sign up for classes. Mixed breeds are welcome. There is a $5.00 discount on brochures available at City Dogs Grocery. Pets make you smile!