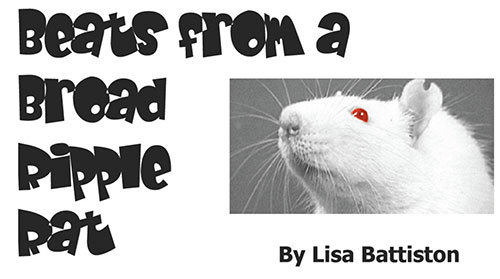 So, free stuff? Free stuff is kind of amazing, mostly because it's free (Free! FREE!), but also because, a lot of the time, I would've just bought it anyway - meaning, I get stuff I want for free!
If you hang out in Broad Ripple a lot - like, an awful lot, embarrassingly a lot - people will tend to recognize you. Well, obviously. People that work in Broad Ripple and other go-to-Broad-Ripple-a-lot'ers. But the fantastic part about this community is its generosity: The "Hey, don't worry about it," when you pull out your cash to pay for that mocha.
I was thinking about this an hour ago while I stopped for a bite to eat in that newer eatery on Westfield, Pomegranate Grill. I'm naturally a little chatty, hopefully not in an annoying way (but who's to say, right?), and I was the only customer they had at the moment, so I asked the very nice man behind the counter for a suggestion. I've had their falafel (ooohhhh, good), but wanted something different.
Samousas it was! (And if you've never had a samousa or don't know what one is, just go over to Pomegranate, because they're only 75 cents.) I asked for three, grabbed a root beer, and asked the guy to put a tip on my card for being nice enough to humour my chattiness.
So he gave me a fourth samousa for free! And some pita bread with babaganoosh! Sweet!
And I'm sure there are slight business reasons for giving random customers a freebie now and then - if I liked the samousas, I'd tell my friends about it, adding that the babganoosh I had was tasty, too, and, thus, word-of-mouth advertising has taken place - but I get stuff like that routinely. From coffee from a random barista to a vodka-coke from a bartender to entry into a club or concert to sandwiches to Yats to discounted books to discounted clothes to God knows what else - I've gotten it. And in giving me free stuff, I reciprocate with a big tip or a promise to return the favor.
Like now. Gimme an extra samousa and babganoosh? Heck, I'll write a column about you.
And I know I'm not the only one. After having worked here, we all recognized each other, the workers. You can point out the bouncers at Seven and Chumley's and Landsharks, the girl from Dagwood's, the drivers from Jimmy John's, the bartenders from the Wellington, workers from Monon Coffee and Hubbard & Cravens and Indy CD and Vinyl and Rock & a Hard Place, the tattoo guys and piercers at Metamorphosis, hair stylists from everywhere, the girls at Pitaya. We know each other, maybe not by name, but enough to know we all work in the service industry and every little bit counts, so you go ahead and have that, you can get me back some other time. Now I'm gone, not working here anymore, but I'm here nearly every day, working on something.
And it's nice to feel like I still belong, like I'm not just the visitor to Broad Ripple, like I still get some kind of recognition for having worked here. It almost feels like a play - you've got your audience, and you've got your crews behind the scenes. I've moved from behind the curtain down into an audience member's seat, but when I go backstage, everyone remembers who I am. And then they give you a free bagel. And then you feel real.